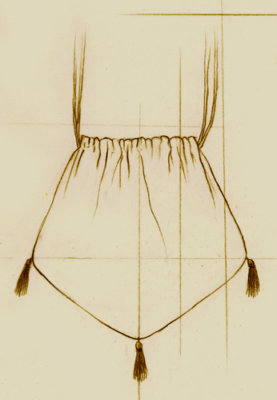 Head-coverings were a critical component of dress in the Middle Ages. Hoods were common with men and women of all classes, and came in a wide variety of forms: long tailed or liripipe, short-tailed, dagged or straight hems, either pull-over or with an open front that was buttoned or pinned closed. Only the sumptuousness of the fabric, elaborateness of the dagging, or extreme length of the tail distinguished the hood of a duke from that of a villein. Men wore their hoods alone or with a plain linen coif beneath or a hat over, while women seem to have worn the hoods alone or with a wimple. In general, the most extreme version of this style with the longest tail was typical in the mid to late fourteenth century while our short-tailed version is more typical of earlier fourteenth century portrayals. It is offered in the same colors as our popular linen tunics, cottes and gowns. This design has an open front that can be closed with your own broach, or you can add your buttons to customize its look. Made of 100% linen this hood is a cool and authentic solution to keeping the sun at bay.

Be the first to review “Medieval Tasseled Pouch” Cancel reply

ABOUT OUR MEDIEVAL LINEN TASSELED POUCH

In a world without pockets, a pouch or purse was a critical fashion accessory. Hung from a belt or girdle the pouch was – and is – a simple way to carry one’s personal effects appropriate for both men and women. Our pouches are based on a 14th and 15th century designs found in artwork such as the Luttrell Psalter (c.1340) and the extant 14th century pouch found Baynards castle, London. Our pouches are made in 100% linen colors to coordinate with our other medieval styles.

Drawing after a detail in the Lutrell Psalter circa 1340 British Museum, London, England

Drawing after a detail of an illuminated MS latin 873 f.21r circa 1480 in The Bibliotheque National, Paris, France

Drawing after a detail from Johannes Gyniford Book of Benefactors of St. Aldan Abbey circa 1390 in The British Museum, London, England

Drawing after a an extant pouch made from half silk velvet from an archeological excavation at Baynard’s Castle, Dock Construction, London circa the 2nd quarter of the 14th century